Domestic violence is held to be one of the main reasons for a large percentage of home-related injuries and abuse. In the US alone, it is estimated that at least 10 million people will be affected by one form of domestic violence or another. It is believed that every healthcare professional will, at one point, either treat or evaluate a patient who was a victim of domestic violence.

The nature of domestic violence is such that it is often repetitive, long-term, and, more often than not, unreported. In this aspect, substance abuse and domestic violence have something in common. Even worse, it causes deep-seated trauma that often makes early victims of it become the abusers themselves later on in life. In some cases, it is disguised as a “disciplinary measure” to ensure that whoever is the authority figure in the household maintains power over everyone else.

If not properly processed, children who grew up in such an environment will carry the abuse with them until they have a family of their own, whereupon they will also do the act of “disciplining” as they have experienced it. This is a vicious cycle that takes years of therapy to deal with. Many career criminals and violent people attribute their sociopathic ways to growing up in an abusive family, fraught with domestic violence.

What are the Types of Domestic Abuse? 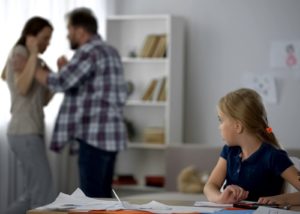 Domestic Abuse could come in a number of forms, all of which are centered on one or more people assuming control and dominance in such a way that others are hurt in the process. It is not uncommon for the forms of abuse to revolve around the whims and desires of the one assuming control. There are instances, however, where it could also be an extension of what the person experienced while young.

This form is responsible for a vast majority of home-related violence. In extreme cases, the victims are brought to emergency centers with life-threatening injuries. The extent of the physical abuse from domestic violence is such that many find it hard to believe it was done by a member of the household.

Physical abuse ranges from receiving “disciplinary” hits to full blown beatings, the severity of which often lands the victim in the emergency room. Reports often note that the abuser, or sometimes the victim, is someone with either a drug or alcohol dependency issue. This led to many surmising that alcohol and domestic abuse go hand-in-hand, which is not too far off from the truth.

Of the many forms of domestic violence known, sexual abuse is among those that are the longest, and most difficult to process. The trauma that this brings to an individual, both physically and mentally, is such that it takes years to rehabilitate. In some cases, the trauma is such that therapy alone could not repair the damage done.

Sexual abuse is when a member of the household forces himself or herself on an unwilling individual for sexual purposes. The victims are not limited to women or even children, but also the elderly as well. The heinous nature of this type of abuse is such that state laws have included touching a person inappropriately and intimidation to force the victim into sexually suggestive instances.

People might not really think that holding a person to emotional ransom is not necessarily domestic violence, as it does not always involve physical violence towards someone else. Emotional abuse becomes a form of domestic violence when the victim is coerced into doing something they normally would not by way of emotional manipulation.

This involves playing upon the victim’s compassion or sense of pity towards the victim, and it could be for any number of reasons, such as asking them for money, coercing them into committing a crime on behalf of the abuser, or even preventing the victim from leaving the abuser.

In other instances, it could be someone who is not overtly exercising control over another person, but is, instead, manipulating the victim into allowing the abuser to exploit money that belongs to the victim.

Much like emotional abuse, there are other forms of domestic violence that do not leave a physical mark, but still contribute to mental trauma after some time. As some abusers know the penalty for physical abuse, they instead resort to intimidation tactics, fostering fear and anxiety in their victims so that they have their way.

While others might say inappropriate language is a cultural thing, common decency will dictate that there is never a good cause to be insulting, hurtful, or demeaning in how one talks to others, let alone family members.

Some parents take disciplinary action to an entirely inappropriate level, such as when they lock up their children at home as a form of “punishment.” Depending upon the age of the children and the state where it happened, this action could be a breach of the Child Endangerment Laws, or at the very least, seen as gross negligence on the part of the parent.

This action is also not limited to children either. There are instances wherein someone would imprison their own spouse at home, on suspicion of infidelity or some other alleged offense.

What are the Signs of Domestic Violence?

Victims of domestic abuse typically live in fear. The abusers, for fear of reprisal, make a point to intimidate and threaten the victims not to tell anyone how they are treated. Unless the victims are absolutely sure that their abusers will not get to them, they will never willingly report what is happening to them.

This, however, does not mean that there will never be signs of the abuse that is happening. These signs are, most of the time, the only proof that there is indeed domestic violence happening.

Although some abusers are careful not to leave marks where they could be used against them, there are also those who simply don’t care about it. This is when bruises, wounds, and other injuries become evident. Most of the time, the victim will claim they were simply clumsy and had an accident, as the fear of their abusers takes hold of them.

Victims of domestic abuse will typically look like they were beaten up, complete with bruises and welts, mostly on the face and head. There are also many instances where the victim has bruising around the neck, as they were most likely choked into submission.

Domestic violence is quite likely to happen repeatedly, and as such, will definitely leave a person damaged physically, emotionally, and mentally. Chronic abuse is held by psychologists to be primarily responsible for clinical depression, chronic anxiety, deep-seated phobias, and even anger management issues.

Even those who have not been exposed to domestic violence since childhood are certain to manifest some personality changes once the abuse begins. As a person could only cope with so much mental and physical torture, their general behavior is sure to change in some way.

It is often believed that violence begets more violence, and this is particularly true with domestic violence. It is not likely that the victim of abuse would strike back at their abuser. At some point, however, they are certain to lash out with all of the pent up anger, frustration, and hurt that they have been keeping to themselves.

This is when specific and pronounced behavioral changes may manifest. People who are known to be sweet, kind, and caring could become uncharacteristically cold, cruel, and uncaring. They could also be highly combative or argumentative at the slightest provocation.

How Are Addiction and Domestic Violence Related? 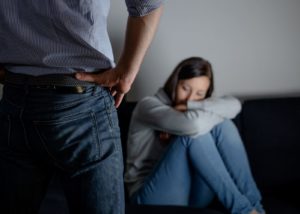 Just like anyone else who is oppressed and in a torturous situation, victims of domestic abuse yearn and long to be released from their plight. Unfortunately, many turn to bad habits as a form of release, since they are too afraid to seek help from anyone else. This is how many victims of domestic violence develop an addiction.

In many cases, the abusers themselves also fuel the addiction, as they could either be addicted to the same substance themselves, or they use the habit as a way to ensure that the victim stays in the abusive situation.

How Does Domestic Violence Affect a Relationship?

The relationship between a victim of domestic violence and their abuser is a sad and tragic one. Many victims become so emotionally and mentally disturbed that they begin to accept their fate and believe that their place is with the abuser. Others live in fear of their abuser, and only stay with them for fear of their lives, or of their children, if they have any.

For those who went through domestic violence growing up, it could leave emotional scars and long-term damage. This could later manifest when a specific trigger comes up, or when the victim is stressed in a way that makes them relive their past abuse.

In any of these cases, victims of domestic violence often have a difficult time with relationships. Any kind of stress could bring up past hurts and make the victim act irrationally, which could very well drive away anyone they are in a relationship with.

Why are People Commonly Stuck in Abusive Relationships? 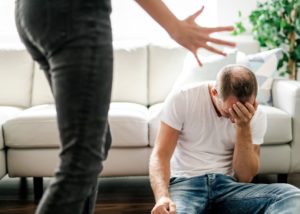 A strange and very damaging relationship often exists between the victim of domestic violence and their abuser. In most instances, the abuser creates an environment where the victim’s will is completely broken, so that it is the will of the abuser that is dominant.

Many victims of abuse long to be free of their abuser, although they often see themselves as being too broken to live a normal life outside of the abusive one. This is why not too many victims willingly seek help even when the opportunity presents itself.

Very few are able to get free of this cruel codependency, and many abusers also make sure that their victims are not able to leave even if they try. The abuser keeps their victims close by limiting their access to resources, getting them addicted to something only the abuser could provide, or threatening them or their loved ones.

Is There Help for Victims of Domestic Violence and Addiction?

Thankfully, there is. Chapters Recovery Center is dedicated to providing a lasting solution, because people deserve to live a good life. We took the time and effort to find out how to help people achieve long-term sobriety, because we understand how difficult it is for people to get there.

You don’t have to live with the problems that come with addiction, such as domestic violence and everything else that comes with it. Talk to our professionals now, so you can start getting better yourself.